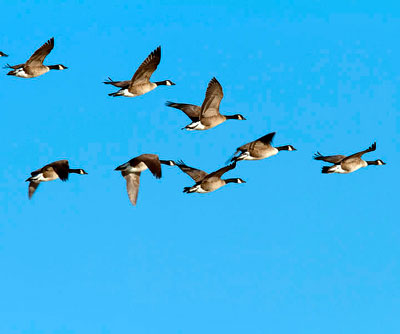 “Next fall, when you see the geese heading south for the winter, notice that they fly in a V shape. You might be interested to know what science has discovered about why they fly that way.”

It has been proven that when each bird flaps its wings, it produces a movement in the air that helps the bird behind it. Flying in V, the entire flock increases its power by at least 71% more than if each bird flew alone.

If we were as smart as geese, people who share a common direction and have a sense of community, we could get where we want, easier and faster.
Every time a goose steps out of formation, it immediately feels the resistance of the air, realizes the difficulty of doing it alone, and quickly returns to its formation to benefit from the power of the partner in front.

If we had the intelligence of a goose, we would stick with those who are heading in our same direction.

When the leader of the geese gets tired, he moves to one of the positions behind and another goose takes his place.
If we were as smart as geese, we would get better results if we took turns doing the toughest jobs.

Geese behind them squawk to encourage those in front to keep up.
If we had the intelligence of geese, we would know that a word of encouragement produces great benefits.

Finally (for those who still don’t believe it), when a goose gets sick or is wounded by a gunshot, two other geese break out of formation and follow it to help and protect it. They stay with him until he is able to fly again or until he dies, and only then do the two companions return to their flock or join another group.

If we had the intelligence of a goose, we would stay side by side, supporting and accompanying each other to the end.

Now what do you think? …