The lists in their different modalities allow us to make our work more efficient, since they allow us to track actions, people or topics in a more productive way, and not just create an infinite list of things. Here are 3 lists that can do the heavy lifting for us on social media.

We generally establish a love-hate relationship with the lists, but these 3 lists that I present below will surely enter the love relationship. Review them very well and apply them today to improve the management of your Social Media in your business and so you can free time for the pleasant things that life offers you.

This is a very easy task that is too often overlooked. If you are one of the people who is overwhelmed by the amount of information that Twitter provides, then perhaps you have not discovered the “Lists” of Twitter. A Twitter list is simply a way to categorize people who are “followed” by specific streams of information, making it easier to find tweets from those people or companies that are important to us and allow a more efficient review. of the information. Twitter lists allow you to:

1. Follow what is happening in a particular niche. For example, I have Twitter lists for Social Media, Video Marketing, and local businesses in Guanajuato.

2. Organize your lists in “public” or “private”. For example, I have a private list of all my clients, so that I can quickly find them in one place. However most of my lists are public.

3. Give credit to the companies or influencers you want to connect with. For example, I have lists called “The Companies I Love”, “Innovators in Social Media” and “Allstars Video Marketing” as well as “Market Savvy” and “Super Useful Tools.” Notice how each of the titles gives a kind of compliment to the person, product or service that is added to the list. When a list is public, not only the users of the list can see who is on it, but those who are added to it can also see which list they are being added to. Why not make them feel good about being added to lists with these kinds of names?

4. Review the information or content on these lists instead of on the Twitter feed. Twitter lists help you stay focused on work, because when you review a specific list, you are focused only on one topic.

My recommendations: Start with the habit of adding everyone you follow to a list. To do this, click on the drop-down button to the right of the Follow button (click on “Add or remove from the lists”) and the categories you want to keep track of a specific topic, you are only focused on one topic. Write the categories you want to keep track of the people or companies that talk about a certain topic, remember that you can only make up to 20 lists. Try to make categories both ways: very general or as specific as possible, so that you can cover almost everyone that follows you with one list or the other. Remember that you can also add people to multiple lists. Look at the lists of others in your industry, especially the most influential accounts, and follow the ones that appeal to you.

And don’t forget to check the lists that you or your brand are being added to. It is worth seeing how we are being perceived and where people are “placing” us within their Twitter categories. 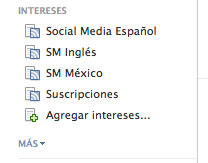 This is one of the new features that have just been released and which is being talked about everywhere. In many ways, Facebook interest lists They are like Twitter lists. The concept is not really that “new” if you already use Twitter to manage the lists in your Social Media strategy.

However, I think they have great potential for organizing information, networking, and reaching influencers in your industry through Facebook. Many of the functions of interest lists are similar to those of Twitter, here are some:

1. You can put people or pages on interest lists. If it is a person (or personal profile) to which you are going to add, it must be your “friend” or a “subscriber” of your feed to be able to add it.

3. You can “share” your interest lists with friends, company pages, or groups, a feature that we really like. A great way to do this is to create an interest list and then share it with the people who have been added to it. Sharing with list members is a good way to spread the word, an example of how to use a content curation tool to build a network. There are countless ways that interest lists can help build brand recognition, think about the potential for other people to share lists they have added you to. Time will tell the extent of this information.

4. At the moment, there doesn’t seem to be any notification if your page or name has been added to a list, I think that would be a nice feature (like on Twitter).

5. One important thing to keep in mind: In Facebook’s own words: You don’t have to “like” a page or subscribe to a person’s updates to add them to a list. Adding items or subscribing to a list is independent of liking or subscribing to a page. Adding a page to your Interest List (regardless of whether you “Like” it or not) is as easy as hovering over the “Like” button and selecting “Add to Interest List”. This adds more weight to the “content over likes” debate.

My recommendations: Now more than ever is the time to “get involved” with your fans, as once again, Facebook has introduced another way for fans to get involved with pages without first having to “like” them. This means that a Facebook user can access the news feed by subscribing to an interest list, even if they have not liked the page.

With fans being able to comment and leave messages on the wall, as well as access your content through interest lists, now everything is about the content and not just about liking the page. Keep this in mind when using Facebook for business. So where do you start? Take your time to create some interest lists that may also be of “interest” to your niche, your fans, as well as influencers in your industry. Start sharing with them and posting about them. Facebook interest lists are a great way to build brand awareness, while curating others’ content. 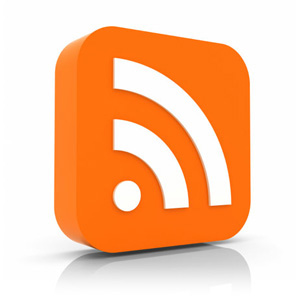 This is a gold-minded strategy to eliminate email clutter. It is a strategy that consists of 3 things: RSS Feeds, Google Reader and a Smartphone application that will serve as a reader.

RSS stands for Really Simple Syndication. Click on the RSS image on the left to know more (much easier than for me to explain it), basically this allows me to gather all the blogs that I want to follow in one place, and choose a series of formats to access that information ( as an alternative to email).

The steps that I have carried out to do this have been very simple. First of all a) I have identified that I was not keeping up with all the blog entries that I was following via email and b) my overflowing inbox made me feel as if I was overwhelmed with information that I could not read. Even with special folders created to supposedly organize information, everything was getting too complicated. So the solution was the following:

2. Go to my subscriptions and favorite blogs and find the RSS feed of each one and (you know, the orange symbol that looks like a radio wave as the image shows) using the RSS button to subscribe here to each one of them. This will take a bit of time, but it’s definitely worth it.

3. Go to my Smartphone and download an application that syncs with Google Reader and link it.

4. Make sure that the feeds of my favorite blogs arrive through Google Reader and in turn through my application on the smartphone.

5. (This is the best part!) I am free to unsubscribe from email blog updates and now I just need to use my RSS feed. I can read my blog RSSs when I have a spare minute during the day, all from my phone or iPad. I also use the “star” to highlight those blogs that I want to keep in sight to read later, or maybe save them in Evernote or Dropbox. The portability of the reader on my phone, I love it.

My recommendations: Personally, I am happy to be able to use Google Reader and my application from my phone. However, there is also the possibility of importing the RSS into a Social Media administration program like Hootsuite. Thus, the most important blog posts can be shared immediately with Twitter followers, directly from my RSS feed. No more tired searches for great content or news on blogs, they come straight to us every day where we need them, ready to be shared with the world. If I can make one more recommendation, it would be to include an RSS button on your website, in this way, those of us who like to use RSS can easily follow your blog…. which means that it is easier to comment and share your content.

There are 3 lists that really improve the efficiency of your Social Media strategy. So …. let’s share. And finally, what if you share us your list of favorite social networks, the blogs you follow, or your Twitter favorites list or the interest lists that you have created Facebook (including how and why you have created them), so that we have the complete idea. Who knows, we might be inspired to make a “list” of them, and blog about it.